Love what Irvington homes for sale have to offer? Check out all available Irvington properties in Portland, Oregon below. To view more information on any of the Irvington Portland home listings you see below, just click the "Request More Information" button when viewing the details of that property. We can provide you with disclosures, past sales history, dates and prices of homes recently sold nearby, and more.

Remember to also register for a free account so that you can receive email alerts whenever new Irvington homes hit the market. And for additional help searching Portland homes for sale, feel free to get in touch with us whenever you’re ready to take the next step in your new home search.

Irvington is a luxury neighborhood in downtown Portland Oregon located on the east side of the Willamette River. This rectangular bordered area extends east to west from NE. 7th Ave. to NE. 26th Ave. and north to south from NE. Fremont St. to NE. Broadway St. It borders the neighborhoods of King, Alameda, and Sabin as well as Grant Park, Sullivans Gulch, Lloyd District, and Elliott. Parts of Sabin and Alameda extend into the northeastern part of Irvington creating a couple of areas of overlap. 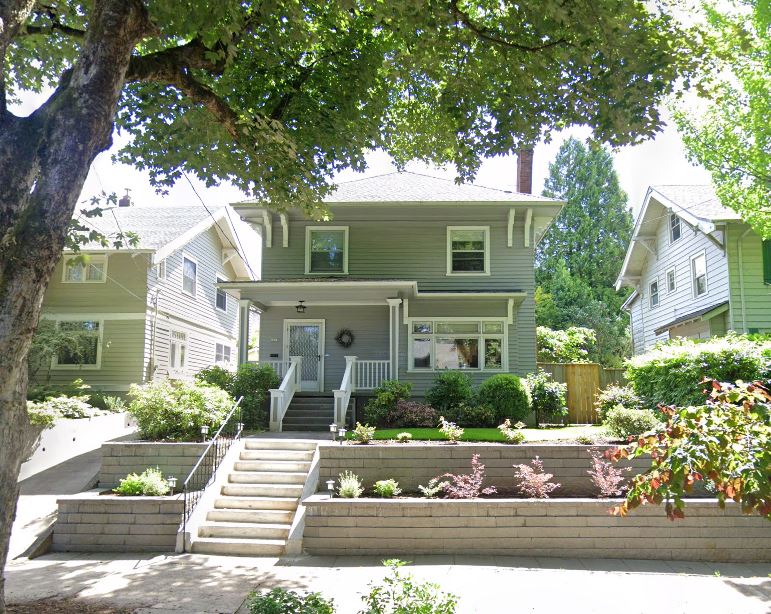 This neighborhood is distinguished by a number of large stately homes, larger lots, and high-end properties. Originally platted back in 1887, Irvington got its initial development in the 1890s with the help of Ellis Hughes and the Irvington investment company. It was a self-contained middle to upper-class residential community that prohibited any commercial or industrial activity to maintain higher property values. As normal growth and development occurred, competition from Rose City Park and Laurelhurst developments began to take place but, Irvington has maintained its residential status and has several homes listed on the National Register of Historic Places.

The Irvington neighborhood makes a great place for commuting to work and getting to many other Portland neighborhoods. There are several freeway ramps located near Irvington, such as those to get to Interstate 84 in Interstate 5. The Tri-Met bus line and MAX light rail is just blocks away from Irvington's southernmost boundary at the Lloyd Center Mall. The Pearl District, Alberta, West Hills, and other historical neighborhoods are no more than about 10 minutes away.

Because the Irvington neighborhood was developed in the late 1800s and early 1900s, you'll find many historical and Victorian-style homes. However, each home is unique and all offer something a little different with larger, ancient trees, mature landscaping, and white picket fences, the pitted me of the American dream. You'll find tree-lined streets, a simpler way of life, and quaint neighborhoods. Most homes were considered upper-middle-class when they were constructed.

Like most neighborhoods that have been around for at least a century, Irvington has suffered certain slumps over the years. Older homes fell into disrepair and have been demolished and replaced with more modern, mid century designs or even a few commercial buildings. However, Irvington still offers the historic charm and unique design that characterizes this beautiful community.

Residents of Irvington are part of the Portland Public School System and are assigned to either the Irvington or the Alameda elementary school, the Beverly Cleary or Harriet Tubman middle school, and the Grant high school.

This classic American neighborhood offers gorgeous older homes, manicured lawns, and mature trees. The tree-lined streets with wide sidewalks make for easy walking and enjoying your neighbors. From homes for sale as well as rentals, this prestigious Portland neighborhood provides a variety of housing options.

Homes in the Irvington neighborhood typically start at about $350,000 up to $3 million. Larger lots, expansive homes, and multifamily properties are all available. While there are not too many commercial amenities right in the neighborhood, Irvington is completely surrounded by shops, restaurants, markets, and the Lloyd Center Mall is no more than about five or six blocks away.

For more information on Irvington homes for sale and real estate listings in this community, browse available listings above or simply contact our office at any time. Search other Portland neighborhoods below and when you're ready, give us a call.

This content last updated on December 3, 2022 2:45 PM PST . Some properties which appear for sale on this site may subsequently have sold or may no longer be available. All information provided is deemed reliable but is not guaranteed and should be independently verified. IDX and listing information is provided exclusively for consumers' personal, non-commercial use and may not be used for any purpose other than to identify prospective properties consumers may be interested in purchasing.