Love what Pearl District condos for sale have to offer? Check out all available Pearl District properties in Portland, Oregon below. To view more information on any of the Pearl District Portland home listings you see below, just click the "Request More Information" button when viewing the details of that property. We can provide you with disclosures, past sales history, dates and prices of homes recently sold nearby, and more.

Remember to also register for a free account so that you can receive email alerts whenever new Pearl District homes and condos hit the market. And for additional help searching Portland homes for sale, feel free to get in touch with us whenever you’re ready to take the next step in your new home search.

While the Pearl today is mostly trendy coffee shops and high-end condominiums, it does come with a unique past. Not so long ago the Pearl District was a mostly abandoned rail yard and actually one of the toughest places in Portland. Rundown and dilapidated, the Pearl was anything but the Pearl of the city. Yet slowly, this urban icon has revitalized the downtown area into a more vibrant urban Renaissance. Diverse, architecturally significant, fantastic galleries and high-end restaurants shape Portland's most iconic community.

Originally platted as part of Couches Addition in 1869, the area around what is now the Pearl was developed primarily with one and two-story homes for blue-collar European immigrants. The first Park block was dedicated for exclusive use by women and children and had a supervised children's playground. Union station was built in 1896 and 1905 the Lewis and Clarke Expedition spurred a huge jump in Portland's population and the expansion of the rail yards at the north end of the district.

There was quite a bit of expansion during this time with controversies and rivalries rising up among railroad companies and industries and in the early part of the 20th century Portland was a national epicenter of furniture manufacturing and the Pearl, which actually remains a furniture mecca today, was at the head of the table. The Gatsby building at 13th and Hoyt and the capital wool Growers Building at 14th and Johnson were one of the major players in the furnishings boom. There were many other manufacturing warehouses that came to be in the Pearl District, now mostly converted to home and retail use.

However, over time, this blue-collar area has seen better days and prior to 1990, abandoned warehouses, long-forgotten industrial sites, and blue-collar cafés dominated the district. Much of the redevelopment started back in the early 1980s when it became the focus of planning efforts by the Portland Development Commission. The 1992 River District Vision Plan and development plan spurned efforts to revitalize the downtown area and in 2000, a steering committee met to discuss the future of the Pearl District. They reevaluated current plans and developed priorities for the neighborhood.

Today, the Pearl District is a vibrant and collected part of Portland and the city wouldn't be the same without it. From high-end loft condominiums to penthouse units, apartments overlooking the river and those close to trendy coffee shops and bookstores, the Pearl District has become a wildly popular downtown location.

What to do in Pearl District 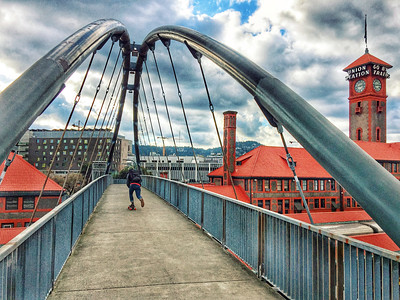 The Pearl District has its own Pearl Magazine. Published quarterly by SagaCity Media, this magazine is delivered to households in the Pearl District and beyond as part of Portland monthly. If you're planning on being a part of this district, we encourage you to subscribe.

But the Pearl is not just about trendy coffee shops and hipster boutiques. There's plenty of parks right in downtown. Some of Portland's most unique parks are located in the Pearl such as North Park Blocks, a shady tree canopy and grassy area, outdoor basketball court and children's play area. Fields Park, a 1-acre lawn and common area was strolling past and a large dog park. Tanner Springs Park is a peaceful and well-preserved wetland in the heart of the Pearl District. And, Jamison Sq., Park open just in 2000 known for its unique fountains and a great place to cool off on hot summer days.

The Pearl is known for its eclectic arts and culture environment. There are 17 performing arts facilities and galleries in the Pearl alone. Just browsing them could take an entire week. The district is also known for several business services and financial institutions, clothing stores, eclectic book and stationary shops, jewelry and gift shops, home design, and multiple dining options.

Between Interstate 405 and the river are over 200 fantastic breweries, wineries, cafés, coffee shops, bistros, fine dining establishments, saloons, prep kitchens, donut shops, ice cream parlors, and even a cookie dough café. For just about every taste and budget out there, there's something delicious happening in the Pearl District. Explore All the Dining Options in the Pearl

Living in the Pearl

A lot of folks that choose the Pearl District as their home destination don't even own a car. A lot of people can live, work, and play all within the few blocks that the Pearl District makes up and for stretching beyond the Pearl, hop on one of the light rail systems and head out to other places around the Portland metro area. Condo started around $250,000 up to high-end luxury penthouses of over $2 million. This is primarily a condominium neighborhood with a few loft options, townhouses, and apartments. Start your online search here for all Pearl District condos for sale, homes and real estate in this community. Feel free to contact us at any time to schedule a showing or for more details.

Loading
BUY BEFORE YOU SELL
GET A CASH OFFER

The content relating to real estate for sale on this web site comes in part from the IDX program of the RMLS® of Portland, Oregon. Real estate listings held by brokerage firms other than Matin Real Estate are marked with the RMLS® logo, and detailed information about these properties includes the names of the listing brokers. Listing content is copyright © 2023 RMLS®, Portland, Oregon.

This content last updated on February 2, 2023 1:00 PM PST . Some properties which appear for sale on this site may subsequently have sold or may no longer be available. All information provided is deemed reliable but is not guaranteed and should be independently verified. IDX and listing information is provided exclusively for consumers' personal, non-commercial use and may not be used for any purpose other than to identify prospective properties consumers may be interested in purchasing.